Jonathan Davies' HUGE hand off on Seta Tamanivalu brings back 1987 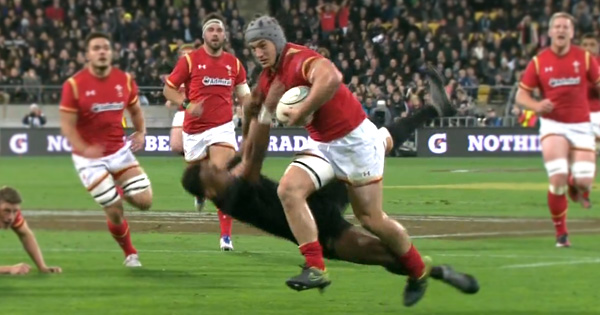 Here’s a look at Jonathan Davies’ massive hand off on All Black replacement Seta Tamanivalu in last weekend’s 2nd Test, as Davies went over for a second consolation score for the boys in red. New Zealand won the game 36-22.

New Zealand had the ball in a promising attacking situation before Tamanivalu had a nightmare minute, as his probing kick was snatched by Jamie Roberts, who charged downfield before he was halted by speedy Beauden Barrett.

Roberts managed to offload the ball to Rhys Priestland, who was scragged again by the impressive Barrett, but managed to get another offload away to Davies, who somehow proceeded to catch the ball between his legs.

He then effectively told the retreating Tamanivalu not to argue with him anymore, with an almighty fend that had the match commentators and fans alike purring.

The stiff arm clearly impressed his teammates too.

Thug life hand off by @JonFoxDavies there

The unsuspecting Tamanivalu isn’t the first person to be on the receiving end of a JD piston hand off. Just ask Ireland’s Jonny Sexton.

The man affectionately known by Welsh fans as ‘Fox’ isn’t the first Welsh outside centre with the initials JD to possess a mighty fend.

Some of you may remember cross-code centre John Devereux, known by the nickname ‘Dalek’ due to the similarity between his outstretched arm and that of Dr Who’s nemesis, was renowned for his hard-running, uncompromising manner around a rugby field, as the Australians found out in the 3rd/4th Place Play-off of the 1987 RWC.

In the related posts below, you can also see some huge hand offs from recent years, including Dean Mumm upending Marcel Coetzee, and Robbie Fruean putting Piri Weepu on his backside.