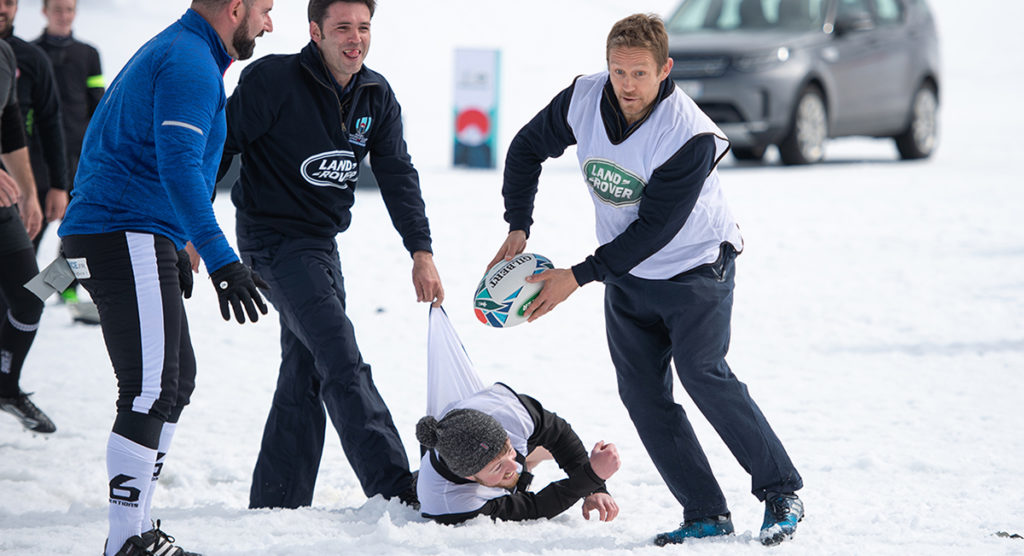 Jonny Wilkinson and Dimitri Yachvilli gave Snow Rugby a try recently, playing in a special game in the French Alps to mark 6 months to go until Rugby World Cup 2019. It was Wilkinson’s first return to playing since retiring three years ago.

While there, both he and former French international Yachvilli offered up their thoughts on the upcoming showpiece tournament in Japan.

Both players coached teams in the snow at the Land Rover Experience centre in La Plagne. Their teams played in front of The Webb Ellis Cup, to celebrate six months until the world’s third-largest sporting event kicks off in Japan.

Wilkinson, the leading points-scorer in Rugby World Cup history, said: “I’ve played all over the world but can honestly say this was one of the most spectacular settings for a game I’ve ever experienced. It was fun to help coach the players against Dimitri’s team and let’s hope that come October, England will win the next edition of Le Crunch.

“From a snowy mountain or a beach to the more traditional muddy field, rugby is all about the camaraderie, spirit, teamwork and respect among the players. There are no boundaries when it comes to rugby.”

Wilkinson also spoke about Wales and their chances of success, Owen Farrell as England’s leader and says Ireland are still a dangerous team not to be underestimated.

Dimitri Yachvili, a finalist with France in 2011, said: “I’ve been lucky enough to play snow rugby in the past and its good fun. Playing half-way up a mountain is a special experience. The snow rugby players certainly go the extra mile in their commitment.”

England and France last met at Rugby World Cup in 2011 in New Zealand, when eventual runners-up France won their quarter-final match-up. Wilkinson and Yachvili both played.

The old foes will meet in October in their final pool match at International Stadium Yokohama.

Yachvili said: “This is such an exciting moment in rugby history and Japan will be fantastic hosts, with a team who provided the talking point of Rugby World Cup 2015 – beating South Africa.”

Land Rover is a proud Worldwide Partner of Rugby World Cup 2019 and has a heritage in supporting rugby at all levels from grassroots to elite. Follow @LandRoverRugby