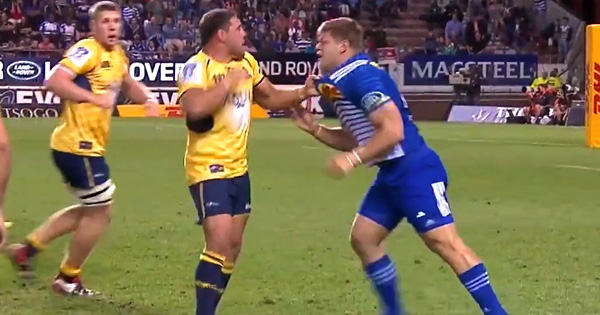 It isn’t often that we see punches thrown in professional rugby these days, but the Brumbies’ Josh Mann-Rea changed the trend slightly, at his peril, when he unleashed against the Stormers on Saturday evening. He was red carded and has since been suspended for a week.

SANZAAR Duty Judicial Officer Chris Morris accepted a guilty plea from 35-year-old Mann-Rea for contravening Law 10.4 (a) Punching or striking. Mann-Rea has therefore been suspended from all forms of the game for one week, up to and including Sunday 27 March 2016.

Morris assessed the case with video footage and submissions of those involved, finding that the offence had an entry point in the low end range, which starts at a two-week suspension.

“I did not consider there to be any aggravating factors to take into account. I did take the player admitting guilt for the offence into account as a mitigating factor. This entitles the player up to a 50 per cent reduction in sanction which I applied. This results in a one week suspension being imposed on the player.”

Mann-Rea’s punches on prop Ollie Kebble came when the Brumbies were trailing by just five points. What followed were a number of Stormers tries, including one referee decision in particular that baffled the visitors.

“Bongo punching was straight-up silly. It doesn’t matter what sparked the incident, he shouldn’t have thrown a punch.” said coach Stephen Larkham.

“He’s very disappointed, it was a usual sort of altercation as you come out of a maul with a bit of push and shove. “[He] has apologised… he felt like he let everyone down and he’s bitterly disappointed he threw a punch.

“But for mine, I’ll have to look at it again, I don’t think it should have been a red card.”