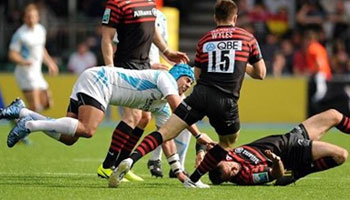 Worcester centre Josh Matavesi wasn’t available for this weekend’s Aviva Premiership match against Harlequins as he was banned for four weeks on Wednesday. The suspension came after an awful challenge he made on Neil De Kock last weekend.

English born Matavesi, who made his Fiji debut in 2009, coat-hangered De Kock in what was described as ‘a horrendous challenge’ by Saracens director of rugby Mark McCall.

McCall was fuming at the tackle, which wasn’t spotted by the referee or his officials at the time, as can be heard on the referee mic on numerous occasions in the below video.

“We could have lost our scrum half for the rest of the season and it’s luck that he hasn’t broken his jaw or fractured his cheekbone,” said McCall afterwards. “It was a horrendous challenge and we’re pretty upset about it. Neil’s okay but it’s through sheer chance that he’s okay.

“It looked pretty deliberate to me – unquestionably – so if that was a ploy they were going to try and use during the game I thought we needed a bit of protection from the officials.”

McCall vented his anger towards the opposition bench at the time, something former Warriors boss Richard Hill [Hill was replaced by Dean Ryan in midweek] sympathised with.

“It was a very clumsy challenge from Josh, but he’s not a malicious player. It was badly mistimed. Josh has apologised and I fully understand Mark’s reaction to protect his player,” he said.

At a RFU disciplinary hearing on Wednesday, 22-year-old Matavesi pleaded guilty to the dangerous tackle charge and was banned for four weeks, ruling him out of the last two games of the season.

The ban runs until 6th May, two days after Worcester’s season ends, then reactivates from 31 May to 6 June, which means he’ll miss the opportunity to represent Fiji in their first two matches of the Pacific Nations Cup against Japan and Canada. Some may say four weeks is lenient for this.

Do you agree that it’s probably one of the worst high tackles ever seen? Browse through the related posts for more, including a howler from Fritz Lee in 2010.