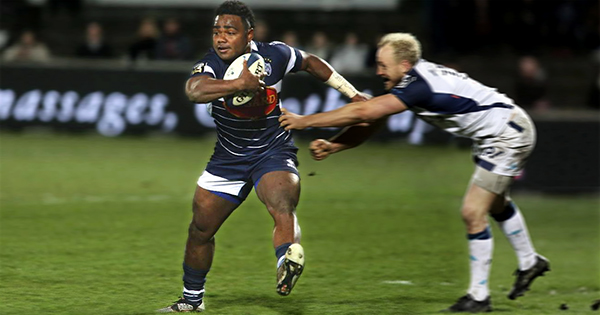 Agen winger Filipo Nakosi scored a try that was nothing short of sensational against Montpellier on Saturday night, helping the hosts defeat the Top 14 league leaders 31-29.

Fresh off the restart, Montpellier’s return kick found its way into Nakosi’s hands beyond the halfway line. He started inside before a quick step found him changing directions and dashing down the line, burning Ruan Pienaar in the process with a clever kick ahead. All that remained was the emphatic dive and score.

Looking very much like brother Josua Tuisova, of Fiji and Toulon fame, powerful running and the ability to finish most certainly run deep in the family.

Early on the match the guests were playing with their backs against the wall as lock Jarrad Hoeata was given a red card within the first few minutes. A yellow card before halftime then found them down to 13 men.

Under the circumstances, Montpellier gave Agen all they could handle. However, that was as close as Montpellier would get as Agen stiffened their necks and closed out the match for their seventh win of the season.

With Tuisova as his younger brother, and Fiji Sevens legend Pio Tuwai his older brother, it’s little surprise that Nakosi has this kind of finishing ability. We hope to see more of it again soon!