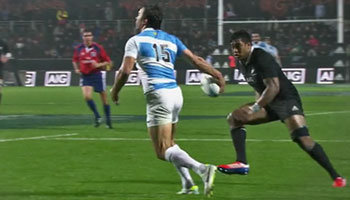 Despite having suffered numerous injuries and never quite having reached the consistant form of some years back, Juan Martin Hernandez is a rare talent. Capable of doing just about anything with a rugby ball, here’s a look at one of his latest tricks.

Last year, the inaugural year of the Rugby Championship, Argentina stepped up and competed well in their first ever inclusion in a major tournament. Hernandez played his part and against New Zealand we saw him produce a fan favourite clearance kick.

He went for a banana-kick, somehow controlling it to the point that it went out into touch.

On Saturday, deep in his own half and with the rain pelting down, he did something special again. This time is was a one-handed long pass to Juan Manuel Leguizamon. Sure, he could have just passed it in a conventional manner, but then he’s not called El Mago (The Magician) for nothing.

After the game he said that his side gained confidence from the narrow defeat to the All Blacks.

“We must continue to learn from them. They’re a great team and know how to manage the game,” he said. “We need experience and maturity. Hopefully we will grow.”

He added that they hope to get good ball and attack more in their upcoming match against Australia, and that they are growing game by game, gaining experience and confidence. He’s clearly referring to his team mates, because judging by passes like this, confidence is not an issue.

View All Blacks vs Pumas highlights