Juan Martin Hernandez's incredible banana-swerve kick vs the All Blacks 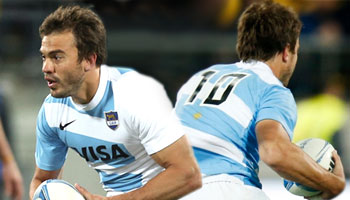 Argentina were buoyed by the return of mercurial flyhalf Juan Martin Hernandez for their match against New Zealand in Wellington, but while he couldn’t influence the final 21-5 result, he did come up with this magical bit of play in the second half.

Hernandez, widely recognised as one of the most naturally gifted players in the game, missed the Pumas’ 16-16 Rugby Championship draw with South Africa in Mendoza due to a groin injury.

He returned against the All Blacks, proving his worth with not only his strong defence, but his well placed tactical kicking too, including one clearance in particular that caught the eye.

A few years back Dan Carter came up with a freak kick (albeit from the kicking tee), and against Carter’s All Blacks Hernandez’s natural ability came through as he kicked one of the best touch finders you’re likely to see.

If you watched the game live, you’ll know how tense things were at that stage, so to serve that up in what were challenging Wellington conditions was quite a feat.

Argentina play Australia next, on the Gold Coast, and coach Santiago Phelan has rewarded his forwards for their stong performance. There are only two changes to the side that faced New Zealand, and they come in the backs, where Martin Landajo replaces Nicolas Vergallo at number nine, while Lucas Gonzalez Amorosino slots in at fifteen, with Martin Rodriguez moving to the bench.

Do you think this kick was intended, or are we getting excited about a bit of luck? Let us know in the comments below!