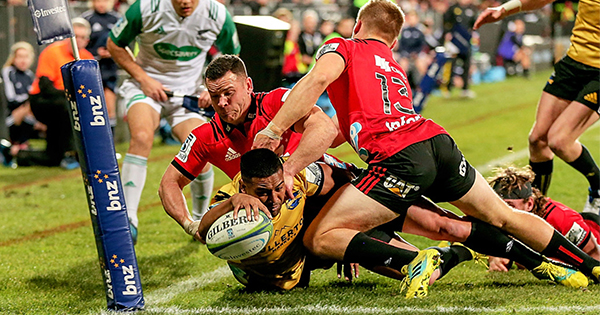 Former Test winger Julian Savea had another top game on Saturday, despite being part of a losing cause, as the Hurricanes went down 30-12 to the Crusaders in their Super Rugby semi-final. Savea beat three to score a miraculous try in the corner, then steamrolled an All Black.

While Ben Lam has been the top winger for the Hurricanes this year, and indeed for the tournament, 27-year-old Savea’s form has also been highly impressive.

He played a large part in the quarter-final, then carried well and put in this incredible finish against the Crusaders. It came from a handy pick-up low to the ground, then a strong run and miracle finish, which required the services of the TMO to be awarded.

Benefit of the doubt clearly went his way, as the on-field decision was ‘TRY’. They couldn’t find any definitive evidence to call it the other way, so his big stretch into the corner was rewarded.

With the Hurricanes not making the final, the 54-Test powerhouse now moves to Toulon, who will be licking their lips at his recent form, and apparent desire to continue improving as a player.

“It’s bittersweet,” he said recently, speaking about the move to France on a two-year deal.

“Excited to leave but it’s also been a big part of my life, this club, and very special to my heart.

“I’ve given everything to them [Hurricanes], and they’ve given so much back to me, so I’m pretty stoked and honoured to represent this club and, as I’ve said, this is probably the one jersey I’ll miss most.”

Crotty left the field later for a head injury assesement, but will probably be fine for Saturday.

“Now the need is to go through the usual protocols throughout the week and make sure he is available for selection. He is highly valued and we love having him around. It was more a knock than concussion, but we need to work through the process and be ready if he isn’t fit.”

The Crusaders host the Lions in the Super Rugby final on Saturday at 19:35NZ/09:35CAT