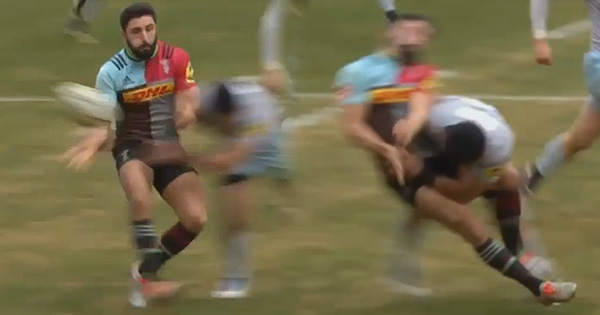 Samoa’s Pisi family made history at the Rugby World Cup when three brothers took to the field at the same time, and while George probably has the reputation as the hardest hitter of all, brother Ken has shown that he too can be lethal on defence.

This hit on Tito Tebaldi was absolutely brutal. Just watch.

Ken, 26-years-old, is the youngest of the three brothers, with Tusi the oldest at 33. Middle brother George, 29, has been featured here on Rugbydump a few times for his massive hits, so it’s nice to see that it clearly runs in the family, even if Ken did have to learn the hard way.

“I was like their tackle bag growing up. I learnt a lot from them. We used to play a lot in the backyard,” he said recently.

This tackle on Tibaldi made the Harlequins halfback look like a crash test dummy, and even though Pisi himself could have been injured in it, the impact did the job.

This match against Harlequins actually had a few talking points, none more so than the dramatic finish. You can see the big tackle above, and the highlights wrap right here below.