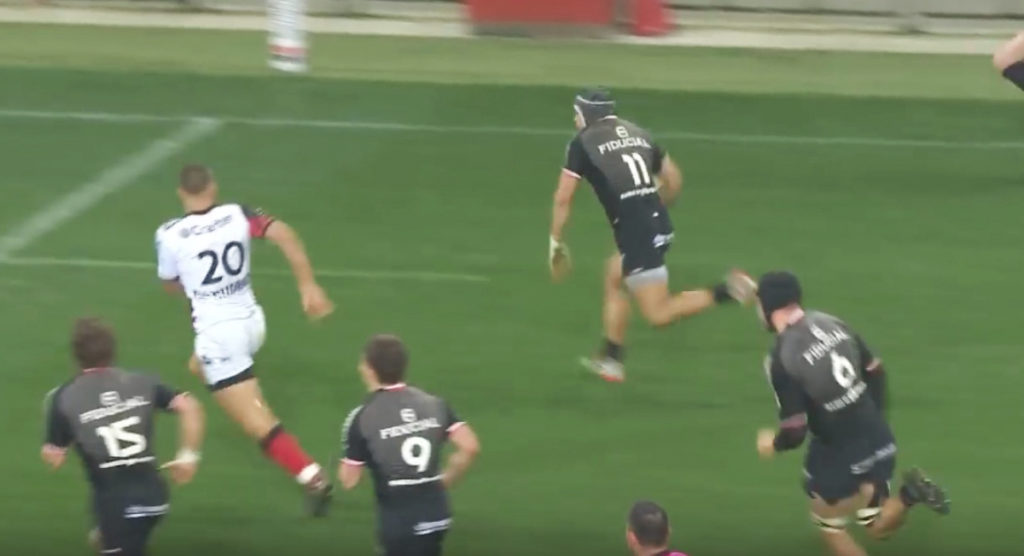 South African winger Cheslin Kolbe has proved quite the sensation this season and he was in fine form again yesterday, scoring another superb try in Toulouse’s 39-0 rout of Toulon at the Stade Municipal.

Ugo Mola’s side were already assured of victory thanks to scores from Yoann Huget, Antoine Dupont, Thomas Ramos and Piula Faasalele. The home side saved their best till last, with Kolbe showing more of his lightning quick steps to touch down for his 10th try in 22 appearances for the club.

The skill level involved in the try was something to witness, with backs and forwards combining in a way only Toulouse can at the moment. Coming from a quick tap penalty from full-back Maxime Médard, Toulouse caught the Toulon defence off guard initially.

Back-rower Alban Placines broke free before off-loading to Huget who in turn fed an overhead pass which was meant for Médard. It didn’t go to hand, but Louis Benoit Madaule flicked it onto Dupont, whose pass to Kolbe still left the winger with much to do.

But Kolbe easily outpaced Toulon replacement Simon Moretti before dishing out the now customary sidestep on Josua Tuisova to score a mesmerising try.

It was a comprehensive performance from Toulouse, who appear to be fully back to their glory days of the mid-2000s. Part of this is down to the youth of the side, which Head Coach Mola has invested a lot of time into.

Blending a mix of experience with the likes of Médard and Huget with members of the France Under 20s side that won the World Championship this season such as Romain Ntamack, as well as the up-and-coming Ramos and Dupont, Toulouse continue to put pressure on Top 14 leaders Clermont Auvergne heading into the New Year.