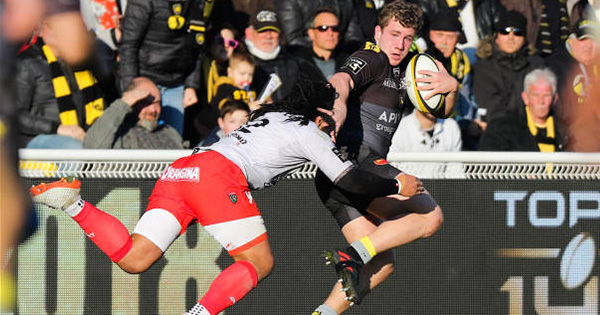 On Sunday, young La Rochelle hooker Pierre Bourgarit decided it was time he became a household name by scoring this unbelievable near length-of-field try against Toulon.

The 80m effort was made all the more impressive with the dummy and then ease in which he shed All Black legend Ma’a Nonu’s attempted tackle.

Credit should also go to the initial offloads by both La Rochelle’s Uini Atonio and Kevin Gourdon. The rest was down to Bourgarit’s ability.

Many of the best hookers now appear to possess enough speed to potentially slot in as a back, if pressed, and Bourgarit seems to be no exception. Looking more like Dane Coles for pace, Bourgarit at least fits that role of the modern position very well.

It’s not the only piece of good news to come his way. It was recently announced that he’s signed a contract extension with the club. Having spent some time with France U20s, perhaps a call to the national side will be forthcoming.

Unfortunately, the try was not enough to carry the day and Toulon came away with the win 27-20.