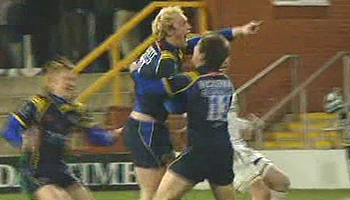 Leeds Carnegie made history against the Newcastle Falcons on Friday night by scoring the fastest ever Guinness Premiership try.

Try scorer Lee Blackett had to wait 22 matches and four years before scoring his first try for the club, but when it came, it came in style, writing his name into the record books after exactly 8.28 seconds.

The previous best was from Tom Voyce of Wasps, who touched down against Harlequins in 2004 after 9.63 seconds.

Blackett, who picked up the bouncing ball straight from the kick off from flyhalf Alberto Di Bernardo, said “I said to Albie to give me the ball inside the opening minute but I didn’t actually mean within the first eight seconds! It was a shock when Newcastle missed the ball from the kick-off and it bounced straight back to me.

It was a bizarre bounce that wasn’t claimed by any of the Newcastle players, and once Blackett had it in his hands they looked almost shell shocked, with Toby Flood in particular not going for a tackle that he probably should have made.

Leeds went on to achieve a famous victory over Newcastle, coming out on top 16-15.