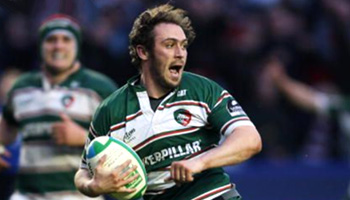 A packed Walkers Stadium were treated to a thrilling finish as their Leicester Tigers snuck victory in the final minute against Bath in Saturday’s Heineken Cup quarter final.

The match was as intense as youd expect to see in the knock out stages of a big tournament, with a few crunching tackles that stood out.

The first of which was 6ft7 Bath wing Matt Banahan smashing Tigers fullback Geordan Murphy. Banahan lined up and hammered Murphy, who did well to get up from the huge knock.

Alesana Tuilagi once again showed his power, but this time it was with a dreadfully unnecessary hit on Bath fullback Nick Abendanon. Abendanon went off with a shoulder injury a few minutes later.

The high point of the match was of course the late winning try, which came with less than 50 seconds left till full time, and the scores deadlocked at 15-15.

Frenchman Julien Dupuy looked to feed Sam Vesty for the drop goal attempt, but decided it wasnt on. His delay led to a gap opening up for him to dart through, before rounding the covering defender superbly.

Dupuys piece of magic booked the Tigers a place in the semi-finals in which theyll meet Toulouses conquerors Cardiff at the Millennium Stadium.