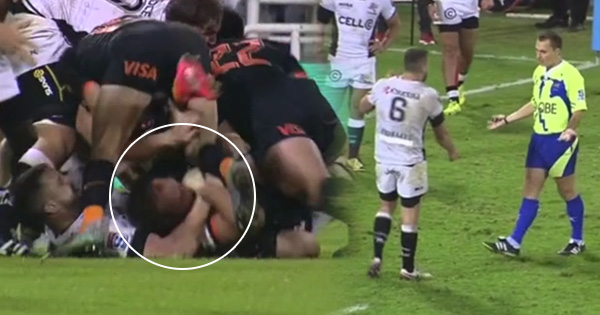 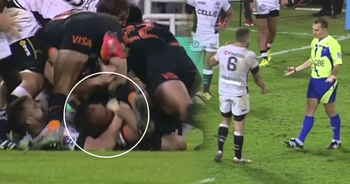 *Note: This article has been updated following the result of the disciplinary hearing

As the Jaguares piled the pressure on the Sharks tryline in Buenos Aires, flanker Daniel took Senatore to ground, ending up with his arm around his neck.

Senatore took some friendly fire in the process, with a knee to the face, then clamped down on Daniel’s arm, before more grappling and a scuffle ensued.

Daniel brought the bite to the attention of referee Marius van der Westhuizen but in such a heated environment with more than a few bits of niggle, he basically told Daniel he wouldn’t look into it.

The Citing Commissioner had a closer look however, deeming the offence to have met the red card threshold for foul play. He was therefore cited for contravening Law 10.4(m) Acts contrary to good sportsmanship – Biting.

Senatore faced a SANZAAR Judicial Hearing today and has since been banned for 10 weeks.

It was not the first time he’s done this. In a Test between Argentina and South Africa in 2013, Senatore took a bite of meaty lock Eben Etzebeth, and was suspended for a total of nine weeks because of it.

“Having conducted a detailed review of all the available evidence, including all camera angles and additional evidence, including from the player and submissions from his legal representative, Stephan Weyers, the Judicial Committee upheld the citing under Law 10.4(m) acts contrary to good sportsmanship  – biting,” said a judicial committee statement.

“However, taking into account mitigating factors including the player’s good character, his playing record and his disciplinary record the Judicial Committee reduced the suspension to a period of ten weeks.”

Jaguares skipper Agustin Creevy has been suspended for one week for a dangerous tackle in the same match on Saturday. His tackle on Jean Deysel resulted in the flanker leaving the field on a stretcher.

A quick look at the incident is below, followed by match highlights