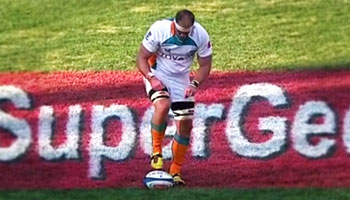 The Cheetahs scored three tries to beat the Blues 34-13 and reach the Super Rugby playoffs for the first time in their history. They had a few tries disallowed too, including this from Ligtoring Landman, who took a big knock but got up to run it in, and celebrate.

The Cheetahs have beaten off challenges from fellow South African sides the Stormers and the Sharks to reach the playoffs for the first time. The Sharks had a chance, but their narrow 20-19 loss to the Bulls ruled them out of contention.

The men from Bloemfontein have a bye next week, which will earn them four points and ensures that they will make the top six a week before the final round of the competition.

“We’ve got a bit of a rest now but we’ll still be training for the playoffs, that’s for sure,” said skipper Adriaan Strauss, who credited their win to an altered mindset this season.

“Our mindset is definitely the difference between this year and last year. This year we really have the belief that we can make it. This week we stuck to the structures a bit more and every guy just focused on his own job. And it worked on the day.”

Both Johann Sadie and Rynard ‘Ligtoring’ Landman had tries disallowed after TMO decisions ruled them out when they thought they had scored. In Landman’s case, it was from a forward pass.

He was smashed by Rene Ranger earlier in the phase and if you watch him closely, you’ll see that it looked as though he might need a bit of a timeout. But lock Ligtoring – which means Lighthouse in Afrikaans – popped up on the wing to take the pass and sprint in for a would be try, before bringing out a classic lawnmower celebration.

The try wasn’t allowed as the pass was quite obviously forward, but it was a great sequence of play.

We had the big tackle, the celebration (which included a bit of a cuddle from 6 ft 9 locking partner Lodewyk De Jager), and then to make it even more comical, commentator Owen Nkumane thought that Landman was ‘getting his Harley on the go’.