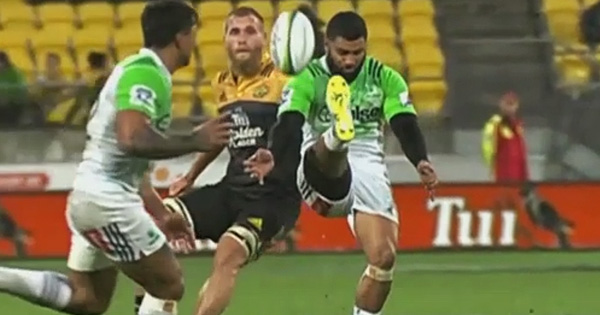 The Hurricanes hosted the Highlanders today in round 14 of Super Rugby, and shortly before halftime we got treated to this special bit of play by Highlanders number ten Lima Sopoaga, who channelled his inner Carlos Spencer in a move that very nearly led to a try.

Unlike when Spencer did it for Northampton Saints many years back, this looked like a set move, and one that another former All Black flyhalf, Tony Brown, came up with.

In the quick halftime chat Sopoaga said it was a “Tony Brown special”. He also candidly said that he nearly pulled his hamstring doing it, but that it was fun out there.

Someone who knows a little something about flair and talent was watching on:

And injured Nehe Milner Skudder couldn’t quite believe what he was seeing.

Sopoaga, who will be hoping to see his name on the All Blacks squad selection list soon, showed another glimpse of his talent two weeks ago when he set up a try for Waisake Naholo with a stunning flat crosskick.

The Hurricanes scored a late converted try through Ardie Savea in this one though, winning the match 27-20 after the scores were tied at 20-20 with a minute left.

If you know of any other similar reverse kicks, let us know in the comments!

The reverse kick! Lima Sopoaga said at halftime that he nearly pulled his hamstring doing it ???? It almost led to a try though ???????? #Repost @greiffel ??? This just happened ???????????? Lima Sopoaga reverse kick, and it worked perfectly. Outstanding #superrugby #highlanders #skills #reversekick #limasopoaga