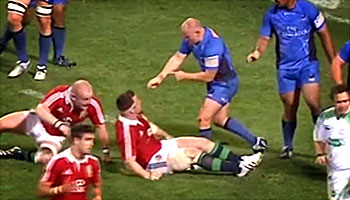 Cian Healy has been cleared following a disciplinary hearing for an alleged bite on Force scrumhalf Brett Sheehan. It was a miserable night for Healy, as he had to be stretchered off after injuring his ankle. Below is a look at the incident, and the injury.

Feisty Sheehan got the attention of referee Glen Jackson in the first half of the Lions’ 69-17 victory over the Western Force on Wednesday. He claimed there had been a bite, so former Saracens flyhalf Jackson called upon the services of the TMO, who couldn’t find any evidence.

Sheehan admitted that he wasn’t sure if it was deliberate, but indicated that he certainly felt something. Force coach Michael Foley has said that the matter was dealt with on the field, so they didn’t lodge a complaint, but the citing officer felt there was a need for a disciplinary hearing.

Judicial Officer, Nigel Hampton QC, found insufficient evidence to support the allegations, clearing Healy of acts contrary to good sportsmanship after a two and a half hour hearing in Brisbane.

“There is no conclusive video evidence of the incident and post-match it was not possible to distinguish any discernible bite marks outside of the ‘regular’ marks usually found following a Rugby match,” Mr Hampton said.

“I cannot find proven on the balance of probabilities that there was a deliberate bite here, and the citing complaint is not upheld.”

He did say however that during the tackle Sheehan’s arm may have come into contact with Healy’s mouth and teeth, but it was an unavoidable situation. Healy is therefore available for selection.

“I am very relieved that the hearing has cleared me of such an allegation. I was naturally very disapointed that there was a citing in the first place,” said Healy.

“I always maintained that nothing happened and I had done nothing illegal. The opposition player’s arm hit me. It is as simple as that,” added the Leinster front rower.

The Ireland prop left the field later in the game after picking up a nasty looking ankle ligament injury. He is still undergoing scans and medical evaluation to determine the severity of the injury. England prop Alex Corbisiero is being flown over from Argentina as cover.

UPDATE: Healy will return home after a scan revealed he has serious ligament damage to his ankle. Scotland prop Ryan Grant is being flown over as cover for Gethin Jenkins, who has a calf strain.