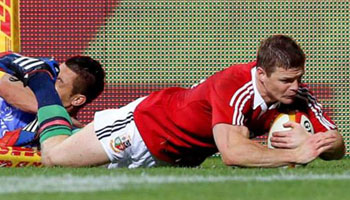 The Lions had little trouble brushing aside the Force in their first match on Australian soil, scoring nine tries in the process as new caps got a run out to push for a Test spot.

The Force offered little resistance in a mid-season fixture that they didn’t seem very motivated for.

The tourists went about their business though, dominating up front while flyhalf Jonny Sexton ran lovely lines and found his runners. The loose forward trio of Sean O’Brien, Tom Croft and Jamie Heaslip were superb, giving Warren Gatland more of a selection headache over the next month.

The one negative from the game came as prop Cian Healy went off injured in the first half with what looked like a serious and painful leg injury, but is more likely ligament related.

“He went for an X-ray and the medics say it wasn’t broken,” said head coach Warren Gatland.

“We just assume it is ligament damage. He may need a scan to further delve into the potential of the injury. We will potentially talk about someone who we might bring out once we find out what condition Cian is in. If it is more serious we will quickly look at getting a replacement out.”

There was an allegation of a bite by Healy earlier in the game, with fiesty Brett Sheehan remonstrating to the Ireland loosehead after a ruck close to the tryline. Coach Michael Foley has said it was dealt with on the field [the TMO couldn’t find sufficient video evidence], but citing commissioner Freek Burger has 12 hours from the end of the match to review the tapes.

While the Lions have scored 128 points and 17 tries in just two outings, the opposition hasn’t been up to the standard required for sufficient Test series preparation.

That will change soon, and the run outs will have been good for combinations and confidence, ahead of their next best test, which will be the Reds in Brisbane this coming Saturday.

CIAN HEALY UPDATE: Alex Corbisiero has been called up, from England’s tour of Argentina, as cover for Healy. His arrival date will be confirmed soon.

“Cian has had an X-ray and, while his left ankle is not broken, he will be assessed further when we get to Brisbane. In the meantime we need to get Alex over here as soon as possible and I am thankful to Stuart Lancaster for letting him go so quickly,” said Warren Gatland.

Extended highlights of the Lions vs the Force from Perth

Nick Heath had a chat with try scorer Tommy Bowe after the game, discussing the unfortunate injury to Cian Healy, combinations and other aspects of the match.

Quick chat with Manu Tuilagi, who formed a strong partnership with Lions legend Brian O’Driscoll in the midfield. Manu touched on that, the atmosphere within the camp and the Healy injury.