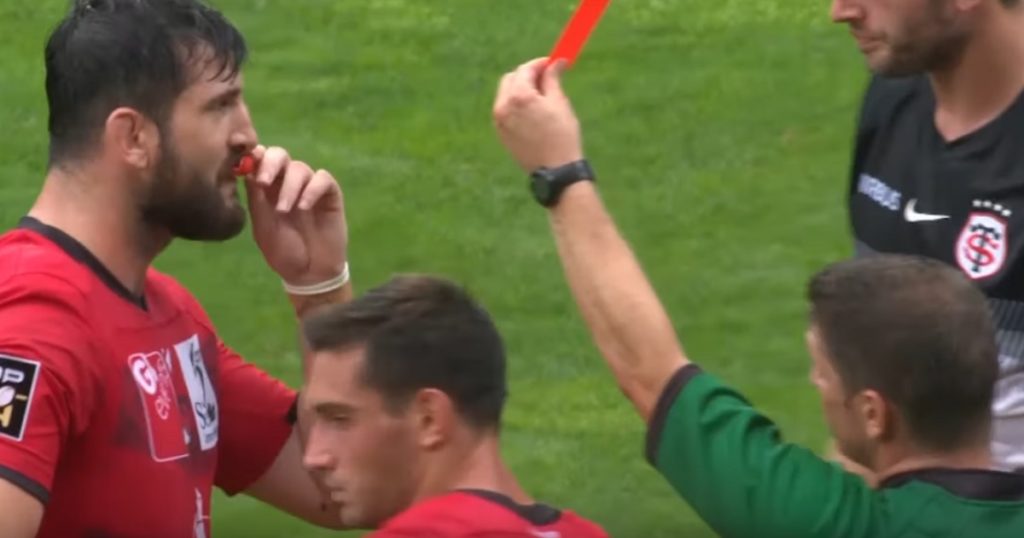 The Top 14 season is well underway once again, with the second round of matches completed last weekend, and it hasn’t taken long for the first red cards to be handed out.

Montpellier hooker Youri Delhommel was the first player of the season to see red as he was dismissed for a dangerous tackle during his side’s comprehensive 43-22 win at home to Pau.

Meanwhile over in Lyon, Loann Goujon was sent off for a more serious infringement; the back-rower was given his marching orders for stamping on Scotland second-row Richie Gray’s chest in the second half.

The incident occurred as Lyon were on the front foot inside the Toulouse half. Goujon was tackled by Gray, who proceeded to hang onto his opponent well after Goujon offloaded to his team-mate.

However, Goujon retaliated by first striking or pushing Gray on the head before stamping on the former Glasgow and Castres player’s chest.

Gray was given a yellow card for his part in instigating the incident, while Goujon could hardly dispute referee Sebastien Minery’s decision to brandish a straight red.

At the time, Lyon were leading 16-9 but a Zack Holmes penalty following the red card reduced the score to just four points.

But any chances Toulouse had of exploiting their man advantage to secure victory were blown by yet more indiscipline in the closing stages, as Jonathan Wisniewski’s additional two penalties gave the home side a deserved win.