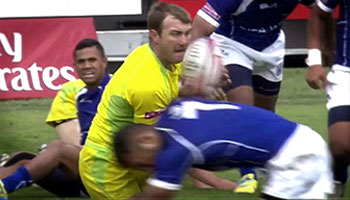 This weekend the London Sevens takes place at Twickenham after another fascinating round in Glasgow a week ago. Here is a quick look at a big tackle that took place in the Samoa vs Australia game, as Lolo Lui demolished James Stannard.

South Africa won the tournament after beating New Zealand in the final, while Samoa had a series leg that they would rather forget, losing to Canada, narrowly beating Russia and then losing the Bowl semi final to Australia.

In that game there was this stand out moment for the Samoans however, as Lui made a sensational hit, knocking the wind out of Stannard to the point that he had to leave the field.

Samoa are fourth in the standings going into the final leg of the world series, in London. While New Zealand have won this year’s series, South Africa and Fiji will be gunning for second place.

Hosts England are in eighth place, but will no doubt be looking for a good showing in front of their home crowd. We’ll have official highlights from the IRB as they happen throughout the weekend.