Looking back at that unbelievable attack on Ronan O’Gara, on a 'bad day for rugby' 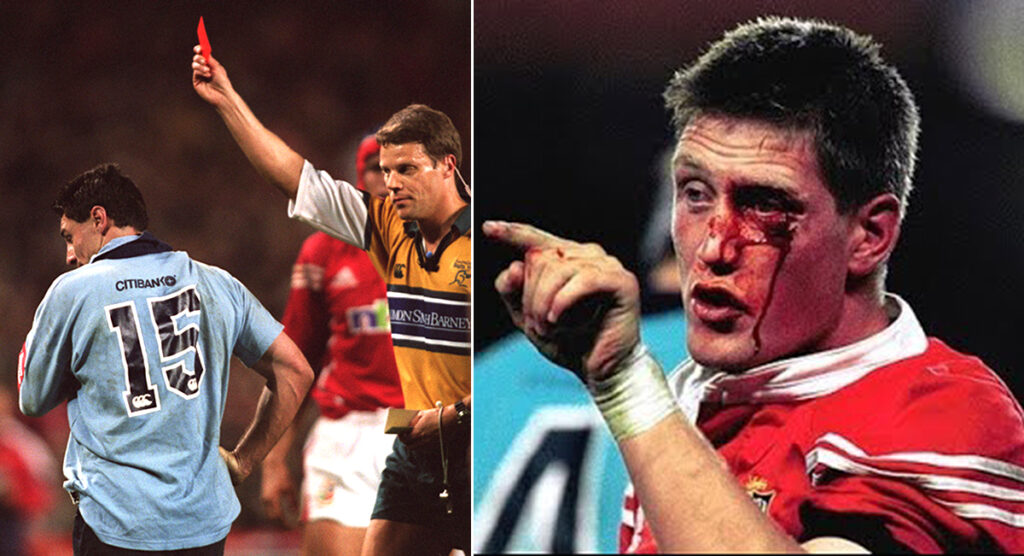 Very few punishments have created such a divide in opinion as Joe Marler’s ten-week ban handed to him in March. The England prop was at the centre of a lot of controversy during the Six Nations when he crossed the line with his buffoonery and made his now-infamous grab of Wales captain Alun Wyn Jones’ genitals during play at Twickenham.

The reaction ranged from calls for a lifetime ban to dismissing it as a non-event, so the subsequent ban also proved to be contentious.

This was only made worse by the fact that the COVID-19 pandemic has meant he will not actually miss a game, as the suspension from the virus came into place the week he was banned, and will likely extend beyond the ban’s ending on June 7th.

While these are unforeseen circumstances that have fortuitously worked out for Marler, it is certainly not the first time that this has happened.

One such ban came after one of the most ill-tempered games in the modern era; the British and Irish Lions’ contest with the New South Waratahs on June 23rd, 2001.

The match had not even passed five seconds before Waratahs lock Tom Bowman saw yellow for an elbow to Danny Grewcock, which ultimately set the tone for what Lions coach Graham Henry called a “bad day for rugby”.

But Bowman’s antic’s at the Sydney Football Ground paled into insignificance compared to what his teammate Duncan McRae was about to unleash upon Ronan O’Gara in the second half.

Following the Irishman’s clearout of the fullback at a ruck, he was subject to an onslaught of eleven punches to the face while he lay defenceless on the floor. The referee Scott Young and the touch judge effectively had front row to this assault, making the decision to brandish the red card an easy one.

The claret-faced flyhalf was ushered from the field with a swollen left eye and a gash underneath which required eight stitches.

The image of the Munsterman’s mutilated face has been consigned to Lions folklore, and at the time led to accusations of a plot to provoke the tourists ahead of the first Test against the Wallabies a week later.

The Australian has since claimed that there had been a continuous back-and-forth between him and O’Gara throughout the match, and what he believed to be a swinging arm had incensed him. However, that does not come close to justifying what he did.

The Lions went on to win 41-24 in a match that had at one point three Waratahs players off the field and two more of the tourists in the sin bin as well.

McRae was handed a seven-week ban, something that did not sit well with his victim, who thought that was too lenient. The player’s remorse and public apology, although never personal, were factors in the ban’s length, as well as his previous good character- even Richard Hill, who was formerly a teammate of McRae’s at Saracens but was his opponent on this occasion, described this as out of character.

But with the Super Rugby season already over, this ban meant the Waratahs player never missed a game in blue, and was ready to line up against the Chiefs in the first game of the 2002 season, which may have embittered some all the more.

When comparing this to Marler’s ban 19 years later, the evolution of the game is undeniably illuminated. There is no escape from cameras these days, and with longer bans a violent salvo as seen in 2001 is seldom, if ever, seen in the professional game today. Further still, a seven-week ban would be met with far more dismay than it was at the beginning of the century.

For better or for worse, the rise of social media has meant that players are scrutinised on a level that would have been unimaginable just over a decade ago. Reflecting on the incident in 2012 with the Sydney Morning Herald, McRae said how fortunate he was that it was in another era. He said: “I’m lucky there was no Twitter back then. I reckon I would have copped a lot of abuse.”

Conversely, O’Gara vexed after the match at the lack of censure directed at McRae, saying to the Guardian: “If we’d done what McRae did, I’m quite sure what the headlines would be in Australia. If the shoe was on the other foot we would be reading about it for the next 12 years.”

While it is dangerous territory to compare transgressions and punishments from a different time, this match in 2001 shows how much the game has changed.

Looking back at that unbelievable attack on Ronan O’Gara, on a 'bad day for rugby' | RugbyDump - Rugby News & Videos