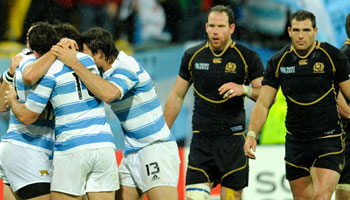 Argentina came from behind to beat Scotland in the driving rain of Wellington. Scotland seemingly had the game in control, but a brilliant solo effort from Lucas Amorosino caught them off guard before Felipe Contepomi converted for a 13-12 win.

Dan Parks came on as a late replacement for Scotland and did just as required, as he steered them into a winning position with a well taken snap drop to extend their lead to 12-6. You’d be forgiven for thinking it was all over after that, but a converted Amorosino try from the restart gave Argentina the win.

Parks attempted to repeat his drop goal heroics but failed to connect properly after being pushed onto his left foot by the pressure of the opposition defence. Contepomi, now 34 years old, proved to be invaluable to his side once again, as he toyed with the offside line while Wayne Barnes appeared to be looking elsewhere.

Scotland Coach Andy Robinson described the try his side conceded as ‘thirty seconds of madness’.

“We lost a game of rugby. We got to 12-6 and I felt like we were in control of the game. The reason we lost the game was a lapse of concentration. Thirty seconds of madness has really cost us.

“You’ve got to be able to finish sides like Argentina off. To score a try the way they did, it was Argentina that wanted to win. They took their chance well and won the game. They had to find some answers and they did,” said Robinson, whose team will now face England in a crucial clash next week.

You can view the Parks drop and Amorosino try below, and full match highlights on the RWC site.