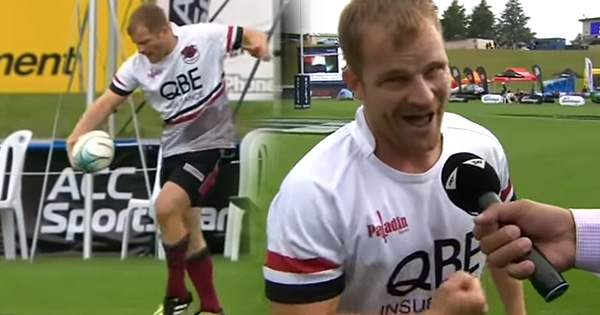 North Harbour’s Luke Hamilton has shown up the likes of Nick Cummins with one of the most amusing post match interviews ever seen. Hamilton was playing at the Bayleys National Sevens and after a win, he made this outstanding post match gesture for his kids.

Hamilton was being asked about his Elvis shuffle celebration after scoring a try earlier, but things soon took an even more outrageous turn, as after commenting that he’s almost double the age of some of the players out there, he then pulled out photos of his young children.

He then broke into song for the camera, knowing that his kids would be watching after daughter Kaylee was apparently upset that he didn’t score (and celebrate with a dance) the previous day.

He then broke into song, performing the theme song from the globally beloved – yet incredibly annoying – Barney, the purple dinosaur.

He said it was for his kids, but also for old friend and commentator Scotty “Sumo” Stevenson, who had apparently not only sung his praises, but given him a bit of a hard time earlier in the day.

Sumo said in his recent column that the interview was legendary, as Hamilton dared to be different.

“I’ve been working in rugby for a decade and in that time I have heard all sorts of things in halftime and post-match interviews. I have heard F-bombs and banter, put-downs and sulks; full credit has been given and ‘nah definitely’s delivered.

“I can’t remember a time, however, when a player has finished a game, immediately whipped out photos of his two kids, and proceeded to sing a Barney the Dinosaur song to one of them, on live television.

“Luke Hamilton, you are a champ,” he added.