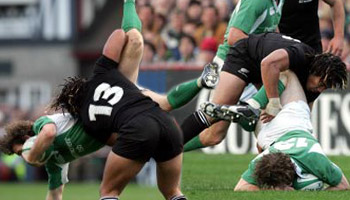 Ma’a Nonu somehow escaped further punishment after this tackle on Gordon Darcy in 2005. The commitee ruled that the refs penalty and the subsequent chat was enough.

Nonu was booed by Irish fans still incensed at the incident during the Lions tour of New Zealand this year when their captain Brian O’Driscoll was hit by a double tackle in the opening minute of the first test.

Both coaches condemned Nonu’s tackle after the game.

“We don’t want those sorts of things happening in the game,” said All Blacks coach Graham Henry. “I know they’re not done deliberately but we need to try and make sure they don’t happen.”

“It’s not safe to do that to anybody,” he said. “It’s not a pretty sight and a bit scary to see.”