Marius Joubert play acting after a tap on the head 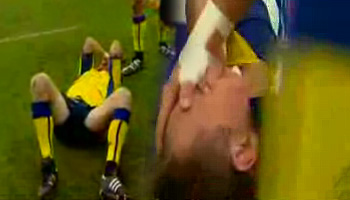 As mentioned in the comments section of my post about David Knox milking a penalty, Marius Joubert went completely overboard against Munster recently, with this shocking display of poor sportsmanship.

After receiving a tap on the head from Munsters Rua Tipoki, Joubert rolls around on the floor as if he’s been hit in the face by a sniper from above. It looks like he was claiming he got poked in the eye, but from the angle he got tapped I don’t see that as being the case.

Terrible acting and poor, poor sportsmanship by an international player who should know better.