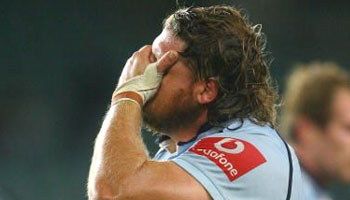 Matt Dunning is a prop from the Waratahs, who’s also played for the Wallabies on numerous occasions. He’s pretty much a tubby guy, but is quite talented. He’s also known for getting in punchups in pubs, nightclubs, and even with his own teamates at times.

In this particular game the Waratahs needed to win the game by 2 tries to advance to the semi finals. In other words, they were meant to be keeping the ball in hand, not kicking.

Dunning apparently meant for the drop goal to miss, thus giving his team the penalty (which they’d use to score a try). However, he slotted it perfectly, and as a result lost the opportunity for scoring the try.

NSW won the game 25-14, but not by enough to get into the semi-finals.

Many in the team embarked on a 48-hour bender which saw Dunning break teamate Tuiavii’s nose, crash tackle other players, harass a cab driver, and annoy members of the public. Quality.