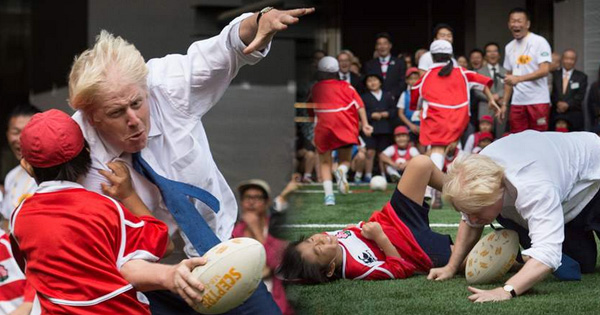 Watch Boris Johnson rugby tackle a child to the ground in Japan – and keep watching for some of his other sporting faux pas http://bit.ly/1PiCjOE

Boris Johnson has hit the headlines again as he clearly got a little too involved in the hype of the Rugby World Cup, and ran over a 10-year-old Japanese schoolboy. The big carry took place during a game of street rugby in Tokyo, where Johnson is for trade relations.

Toki Sekiguchi had no idea that Johnson was in it to win it, but bravely stood in front of the Mayor, who had just scored a try but then took a pass out wide and went all Tuilagi on the poor kid.

“I felt a little bit of pain but it’s OK,” said Toki, as reported by Sky News.

Johnson told the story later at a British and American chambers of commerce event.

“We have just played a game of street rugby with a bunch of kids and I accidentally flattened a 10-year-old, on TV unfortunately. But, he bounced back, he put it behind him, the smile returned rapidly to his face.”

It’s not the first time clumsy Johnson has taken things a little too far, as can be seen in the video above, and then below when he famously ‘rugby tackled’ a footballer during a legends match.