Michael Hooper suspended for one week for striking Nicolas Sanchez 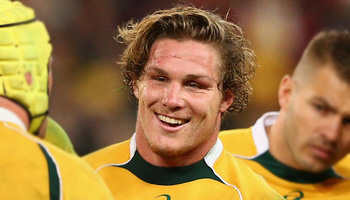 Wallaby flanker Michael Hooper has received a one week suspension for striking Argentina’s Nicolas Sanchez during their Rugby Championship match at the weekend. Hooper will miss just one club game, and is free to play in the Wallabies’ next match.

In summary, Hooper’s described as a push with the open hand, similar to a fend, rather than a punch. This was not accepted, as Hampton rules that despite mitagating factors (Sanchez holding him back), the game cannot allow players to retaliate in such a manner.

Hooper’s good disciplinary record resulted in a reduced suspension from 2 weeks to 1 week. He will miss just one club rugby game in Australia, when Manly play Randwick this weekend.

Read full details from the hearing | Original post and Discussion

UPDATE: SANZAR have appealed the decision, so another hearing will take place on Sunday.

In his finding, Nigel Hampton ruled the following:

“As the Judicial Officer, I considered all the evidence before me including a number of videos which showed additional angles of the incident, medical reports for the Argentina flyhalf, Nicolas Sanchez, the citing commissioner’s report for the incident and submissions made for the player by his legal representative, Anthony Black SC.

“It was submitted on Hooper’s behalf that the action he performed was part of an attempt to stop himself being held by Argentina player, Nicolas Sanchez. The action was described as a ‘push with an open hand’ and not a punch. It was submitted that this action was similar to a fend by a ball carrier attempting to stop himself from being tackled. It was also submitted that the offence could not be made out as a strike because the law specifically lists the offences as the use of a fist, arm or elbow but not an open hand.

“I found that this submission could not be accepted. Allowing open hand striking motions such as this of force to any part of an opposing player’s body could not be deemed an act within the laws of the game and not able to be sanctioned. Striking with an open hand could fall within the definitions of a breach of Law 10.4 (a) Punching or striking.

“The action can not be compared to a fend by a ball carrier. A fend is an accepted arm/hand movement made by a ball carrier on a would-be tackler. In this incident, the ball was not in play.

“The video supports Hooper’s account of events that he was grabbed intentionally by Sanchez who maintained contact as he moved behind Hooper, causing him to become unbalanced, rotate around and effectively run backwards. This action was done to prevent Hooper from supporting a teammate who had the ball and was running towards the goal line. If Hooper was not held in this way, he could have supported his teammate in a number of ways so that his team could potentially score.

“Hooper tried to extricate himself from the hold when he wasn’t released by Sanchez. The actions of Sanchez while deliberate, illegal and an act of considerable provocation, do not allow for retaliation in an illegal way including striking the opponent. Hooper’s account and the video support the notion that he did not punch the opponent in the face. However, it matters not where a strike lands on an opponent if there was indeed a strike.

“It was found that Hooper, in circumstances of considerable frustration and in order to try and rid himself of his opponent, drew back his free right arm and, voluntarily using additional momentum over and above that given to him by the actions of his opponent, struck out at the opponent’s head and neck area with his open hand, making contact with the back of the opponent’s neck and head with considerable, and intentional, force.

“After taking all relevant facts into consideration, I found that the striking offence was committed. I found the incident to have a lower end entry point which stipulates a two-week suspension. I found no aggravating factors to be present but did find a number of mitigating factors including Hooper’s good character and repute along with his good disciplinary record. On that basis, the maximum allowed reduction of 50% was given to the Player, reducing the period of suspension to 1 week.

“The Rugby Championship schedule is such that Australia’s next match is in two weeks time on 8 August 2015. However, due to Hooper’s limited playing time in the match in which he was cited, evidence was submitted and confirmed in the hearing that Hooper and other players who needed game time would be made available and scheduled to play on the weekend of 1 August 2015.

“The Sydney Club competition has qualifying finals this weekend with Hooper’s club Manly to play Randwick on Saturday 1 August 2015. I was officially advised in written form by all parties that if Hooper was available, he would play in this match. I was also advised that other players were being made available to their clubs which I accepted.

“I found this match could not be considered inconsequential and would have meaningful consequence for Hooper given his current competition and rotation within the Australian squad. The player has a close allegiance to the Manly club who have an important match this weekend and he expressed his desire to play in the match following the Argentina v Australia match. Under Regulation 17, all matches are equal and if a player is scheduled to play, then the match should be included in the suspension if it has meaningful consequence to the player.