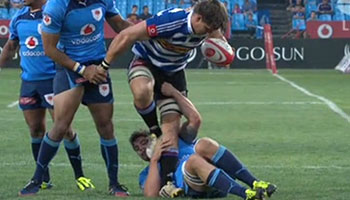 Earlier this week Western Province flank Michael Rhodes was suspended for one match following a disciplinary hearing for the straight red card he received during the Currie Cup Round 6 match against the Blue Bulls in Pretoria on Saturday.

Unlike with Wayne Barnes, referee Marius Jonker didn’t see it so referred to the TMO to check for foul play after touch judge Rasta Rashivenga was on hand to alert him to the offence. Jonker watched it on the big screen and appeared to make the call himself.

Jonker explained to Western Province captain De Kock Steenkamp that he could not rule on intent, but because it was clearly a foot in the face, it’s a red card.

As with Nick Wood and Jacques Burger, Rhodes went over to apologise on his way off the field.

Rhodes initially seemed to be annoyed that Ross was holding onto him after the whistle had blown, but Tuesday’s SARU judicial committee said there was no intent to stamp on the side of Ross’ face.

Judicial officer Peter Ingwersen ruled that Rhodes was being pulled down in the tackle at the time and tried to regain his balance. He did however rule that there was sufficient negligence to find Rhodes guilty of transgressing Law 10.4(b), a player may not stamp on an opponent.

It was deemed a lower-entry offence, and combined with Rhodes’ respectable disciplinary record, resulted in him being suspended for just one match. Rhodes was however suspended for six weeks in 2011 for a dangerous headlock on Siale Piutau.

Perhaps he is lucky that Waylon Murray didn’t take offence to where he grabbed him for support.