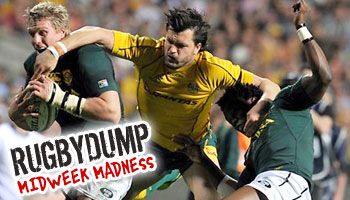 Finely poised at 16-13 to the Wallabies, the Springboks had a good chance of going ahead midway through the second half in their Test in Perth on Saturday. Adam Ashley-Cooper had other ideas, as he launched himself into an incredible double tackle.

The versatile back pulled off a miracle tackle which prevented a try that may have had a significant impact on the final result. He has since called it his ‘two for the price of one‘ tackle.

Speedster Lwazi Mvovo looked to be in space and when caught by Ashley-Cooper, offloaded to Jean De Villiers, who the Wallaby back then dealt with too.

His simultaneous tackles were so good, referee Nigel Owens seemed to overlook the fact that either one could have been blown up as a high shot.

“I was lucky I didn’t get done for two high shots in the one tackle,” he said after the game.

“There was a lot of desperation. Fitness probably got us over the line in the end and the desperation in defence was a positive.

“There’s been a few jokes about it, two-for-one special. I can’t explain it. I was a bit lucky. I committed to one and ended up making another,” he added.

Do you think he should have been penalised, or were you happy with the call?