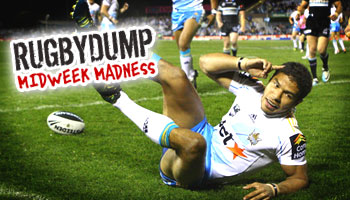 If you’ve followed RD over the years, you’ll know that it’s very rare for Rugby League to be posted on here. Occasionally though, we’ll come across a brilliant piece of skill that is cross-code transferable, and therefore needs to be shared.

This is one of those occasions, so as much as you might dislike the code of League for whatever reason, if this were scored in normal rugby, it would be a sensational try. It wasn’t scored in Union though, it was scored in the NRL in Australia, but we’ll give it the credit it deserves anyway, as it’s a fantastic piece of skill by young David Mead of the Gold Coast Titans.

Following a cross-kick from Scott Prince that looked to have gone too far, Mead simply reached down and scooped it up on the half-volley as the ball miraculously stuck to his hand, before he reeled it in and dived over for the try.

“I think it was a bit flukey, to be honest. I saw it and I thought it hit the line, but I’m pretty happy about scoring it. It just stuck. I don’t know how, but I’m glad it did,” Mead said later.

Titans assistant coach Steve Murphy said that he’s the type of player who is capable of pulling off those bits of skill. “I cant believe he caught that ball. It was just one of those freak things, those amazing things. Hes got those in him, Dave,” said Murphy.

It was his second try of the night and a brilliant effort that quite simply needs to be seen by sports fans around the world, whether you’re into League or not.