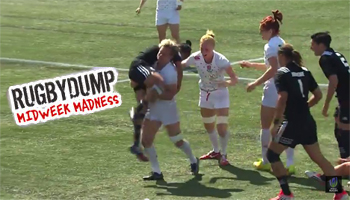 Remember George North’s formidable show of strength and athleticism for the British & Irish Lions in 2013 when he picked up would be tackler, Israel Folau, and carried him over his shoulder for a few metres? Well check out this video of Marlie Packer from England emulating the Welsh winger at the Canada sevens over the weekend.

With scrappy ball near her own try line, Packer seized possession and wasn’t going to be stopped from gaining yards. New Zealand’s Tyla Nathan-Wong was treated to a fireman’s carry back toward her own try line until teammate, Honey Hireme, arrived to assist and bring Packer to the ground.

England player, and World Cup winner, Kat Merchant voiced her support for the sevens team on Twitter, with particular appreciation for Packer’s lift.

It must be said that Packer’s efforts certainly ended a little better than North’s, as the Lions’ star unfortunately landed on his head when he decided to put Folau back down, and required some quick medical attention before continuing.

Although New Zealand went on to win the war on this occasion 24-14, there’s no doubting that Packer won that particular battle for England.