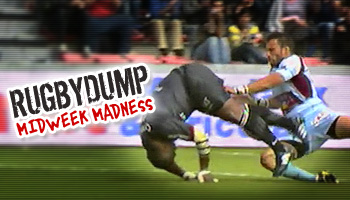 Toulouse comfortably secured a Top 14 semi final spot with their 33-0 win over Bourgoin at the Stade Ernest Wallon on the weekend. Rupeni Caucau got a little carried away with things though.

Clearly in control after two tries to wing Vincent Clerc, the former superstar Caucau broke the line beautifully then offloaded to Maxime Medard, who fed him in return for what should have been a casual stroll to the tryline.

The flying Fijian, these days plying his trade in the midfield more often than not, managed to bring out the goosestep before somersaulting as he put the ball down to score. The only problem was, he didn’t put the ball down, according the referee anyway.

It was referred, and the try was disallowed as it was adjudged to have not made contact with the ground while his fingers were touching it. By all means it was a close call, and many would have said just give it. It is an interesting one though in light of some of the celebrations we’ve seen of late, which some of you have taken a severe disliking too.

So do you think this try could have been given, or did Caucau make a massive fool of himself?