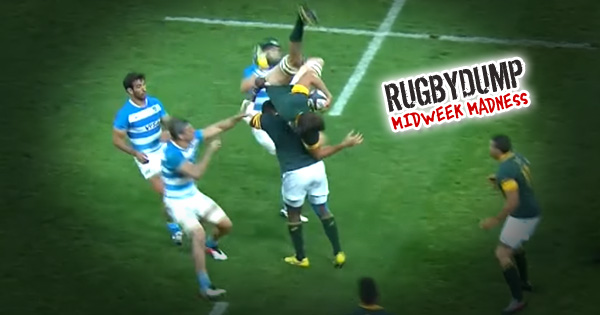 Tendai ‘Beast’ Mtawarira has had his famous nickname since he was a child, but since becoming a professional rugby player he has shown on numerous occasions precisely how apt it is. A few years back two feats of strength went viral, and on Saturday, he did it again.

In 2011 Mtawarira managed to save flanker Keegan Daniel from what would have been a very dangerous fall when he held him up in the Currie Cup. A year later, he did the same thing again, except that time with a far larger second rower.

On Saturday, it was gigantic Springbok lock Eben Etzebeth, who wasn’t quite as elegant as the other two but also needed to be held up after an excellent take from a 22m restart kick.

FYI: Etzebeth is 2.04m tall and weighs 123kg’s, so it was yet again very impressive from the Beast, who managed to maintain his balance and footing until the big man was safely on the ground.

Since the first time he did it, we’ve seen a few similar thing take place too, first with Trevor Nyakane for the Cheetahs, then Scotland in the 7s, when the player actually did a full flip.