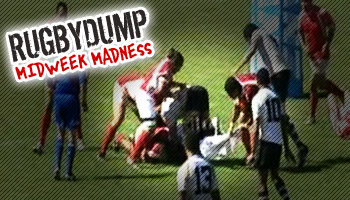 When Tonga and Fiji met in their Pacific Nations Cup match at Teufaiva Stadium in Tonga on Saturday, we got to see a pretty funny moment in the 54th minute.

Fiji made their way down field through some splendid handling and were close to getting over the whitewash, when the move come to an abrupt halt five meters out.

It wasn’t a big Tongan hit or a brilliant driving team tackle that stopped the move, nor was it bad handling by Fiji. What it was though, was the Fijian hooker Sunia Koto’s jersey being ripped off him, tossed away, and the ball going with for the ride.

It took a few seconds for the players to realise what happened, but once they did, the ref blew a quick stop to play, which allowed the commentators and viewers to have a good chuckle about it while watching the replay.

It’s not the first time we’ve seen the ball up the jersey trick, with big Georgian lock Mamuka Gorgodze recently ripping a players jersey off, ball and all, and setting off downfield before being called back by the ref.

Tonga went on to win this Pacific Nations Cup match 27-16, with Epi Taione in particular having a great match. The best moment for me though was definitely when the ball went missing in action for a second or two.  “Stop the game so the ball can get undressed .”