Mike Tindall clears out Tom May after Jimmy Cowan injury 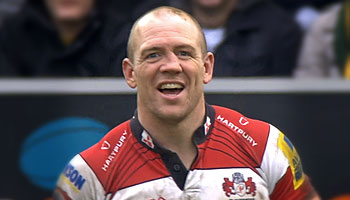 Gloucester moved ahead of Northampton Saints on the Aviva Premiership table with a 27-11 win at Franklin’s Gardens on Saturday afternoon. The win came at a cost though as the visitors lost Kiwi Jimmy Cowan to injury in the second half.

Since the game there have been quite a few requests via our Twitter and email for RD to show a clip of what happened. The requests come not so much because of the Cowan injury, but more so the manner in which Mike Tindall took care of Tom May.

As you can see below, Tindall wasn’t going to leave his man alone on the floor and despite May stealing the ball, the former England captain cleared him out in no uncertain terms.

“Didn’t hurt, it was definitely a big hit though ha,” said May on Twitter after the game.

Cowan wasn’t as spirited though and picked up a knee injury as he slipped changing direction. He hobbled off and it has since been confirmed that he will likely be out for the rest of the season.

According to a BBC report today, Cowan damaged ligaments in his knee resulting in him being out of the game for at least six months.

“He’s very positive and just wants to play. He’ll do whatever he can to get back sooner than that,” said Gloucester director of rugby Nigel Davies.