Moody sees red over Tuilagi tackle on Cueto in 2005 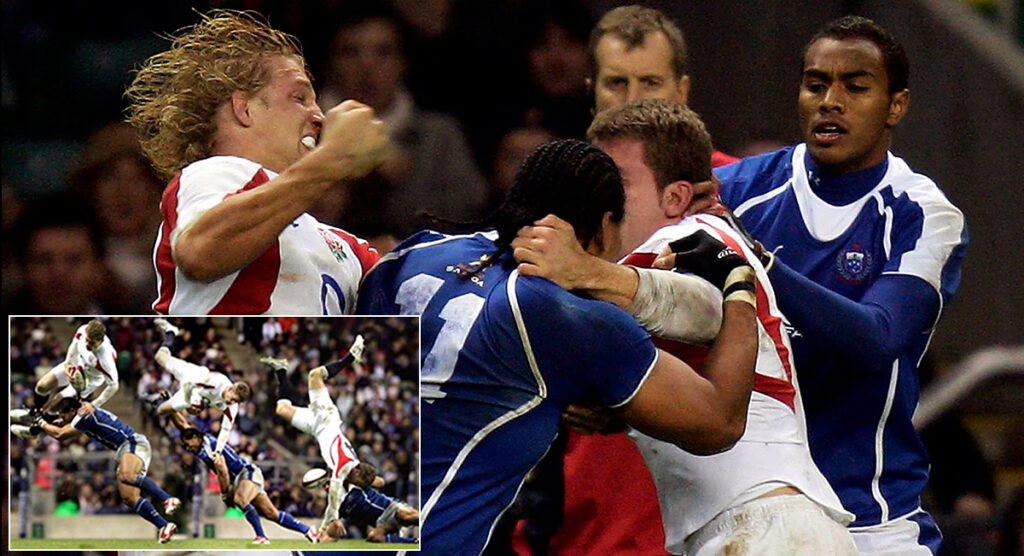 In 2005 England hosted Samoa at Twickenham in a match that produced a record score, with the visitors taking a 40-3 hiding, but the game was marred by a few ugly incidents in the second half.

Twenty minutes from time prop Justin Vaa was carded for bringing down the scrum, and then six minutes later Mark Cueto got taken dangerously around the neck by Samoan fly-half Tanner Vili, who was sent from the field.

With five minutes left in the game, Cueto was taken out again, this time in the air with a reckless challenge from wing Alesana Tuilagi. Cueto confronted Tuilagi, and a mass brawl ensued, with Lewis Moody running in, unleashing a barrage of punches.

Referee Mark Lawrence had little option but to red-card both Tuilagi and Moody.

“In hindsight, I shouldn’t have reacted,” Cueto said.

Maybe Alesana thought I was going to do something, and he reacted in self-defence. My actions seemed to spark it, but its difficult to stand off and not get involved when fists are flying.

Cueto said his reaction could in part be blamed on the fact that the incident occurred so shortly after being clothes-lined by Tanner Vili.

Samoan coach Michael Jones defended his players, claiming Tuilagi was already committed to making the tackle on Cueto, with it being bad timing with no malice intended.

“I think the guys were getting quite frustrated, and they didn’t appreciate one of their boys getting hit from behind, which is what I think started it.”

Moody became the first England player to be sent off at Twickenham, and only the fourth to be dismissed in international rugby.

Moody was later suspended for nine weeks at a disciplinary hearing, while Tuilagi received six weeks for his part in the incident.