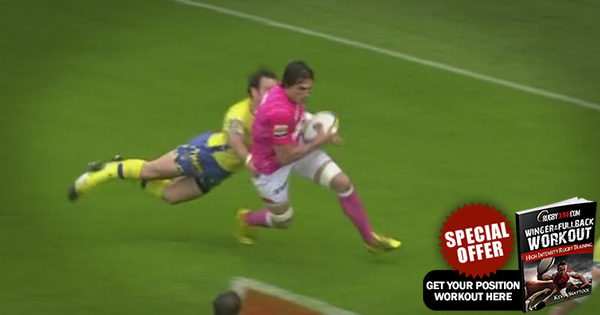 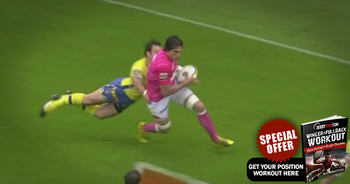 Clermont beat Stade Francais 36-10 on Sunday, edging closer to reaching the Top 14 Semi Finals. Scrumhalf Morgan Parra collected a personal tally of 23 points, including denying the defending champions an early try with this outstanding piece of play over the tryline.

Stade Francais nearly off to a perfect start against last season’s Top 14 finalists as they created a nice string of passes down the left flank following a turnover.

Sylvain Nicolas cruised over for what should have been the opening try of the day, but scrumhalf Parra was chasing from behind and managed to deliberately punch the ball out of his hands.

It was a brilliant piece of play, reminiscent of George Gregan on Jeff Wilson, and one that set things up for the rest of the day, with Parra going on to kick 18 points and score a try of his own.

“Morgan Parra is having a good season, it’s night and day with the start of the championship,” said Clermont coach Franck Azema.

Parra took a bit of a knock later in the match after Jamie Cudmore, playing his final match for Clermont, flew into a ruck but hit his own player in the back. The Canadian powerhouse made up for it a little later though, turning provider for the nicely taken Parra try.

Clermont are top of the table and need to beat either Toulouse or La Rochelle in their remaining matches to secure a semi final spot. Stade Francais meanwhile are sitting in 12th position.