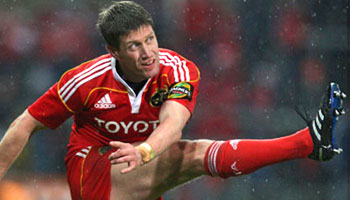 Munster flyhalf Ronan O’Gara is well known for his kicking ability, but against Edinburgh at the weekend it wasn’t only the ball he directed his famous boot at. The Ireland star lashed out at Sean Cox, so will face a disciplinary hearing in Dublin on Thursday.

The Heineken Cup fifth round game was won 26-17 by Munster, but was marred on Monday by the news that O’Gara had been cited for his second half offence. Despite winding O’Gara up with a shoulder block, Edinburgh’s Cox was clearly incensed by the kick that sparked a bit of a scuffle.

Cox predicted, via a few choice expletives, that O’Gara will be spending some time out of the game.

Despite being missed by the match officials at the time, the incident was picked up by citing commisioner Alberto Recaldini, who promptly cited the 35-year-old Munster legend.

He looks likely to be suspended for foul play, which could mean he will miss a significant chunk of Ireland’s upcoming Six Nations campaign. They face Wales in Cardiff on February 2nd.

He would also miss Munster’s final Heineken Cup pool game, against Racing Metro, at Thomond Park on Sunday. The offence could result in a ban of anything between four weeks and a year. Judge Jeff Blackett will be the one making the decision on Thursday.

In the 2010 Six Nations Ireland’s Jerry Flannery kicked Frenchman Alexis Palisson’s legs, but later admitted his guilt, saying he was deserving of a red card. He was cited and received a six week suspension. O’Gara has yet to be red carded in the Heineken Cup.