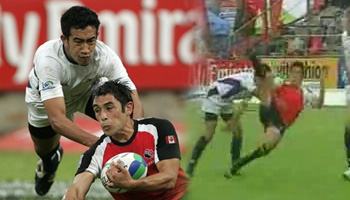 The IRB Sevens World Series got under way in Dubai recently. New Zealand took the honours there, and in George we saw them trounce the fatigued Fijians. We’ll hopefully secure some footage from the final for you soon.

One of the highlights for me from the the weekend in George was this huge tackle by Nese Malifa from the USA against Canada. As you can imagine, the rivalry between the neighbouring countries is strong, and before this game the USA hadn’t beaten Canada in Rugby Sevens since 2002.

Thanks to huge efforts from playmaker Malifa, hard working Todd Clever, and the unpredictable World Cup superstar Zee Ngwenya , the USA are making great strides in the odd shaped balls game, and managed to pull off a 15-5 victory against the men from up north. They have now scored more points in this tournament than they did in the whole of the 2006/2007 Series.

The men from the potentially largest rugby playing nation in the world went on to lose out narrowly in the Plate Final to Kenya by just one point. This was after providing one of the shock upsets of the tournament when they beat Samoa in the Plate semis by 24 points to 19.

Lets hope we see more great action like this from the USA in the future. Growing the game in a country their size can only be good for the World Game, and hopefully we’ll see plenty more big hits from players like Nese Malifa in the future.