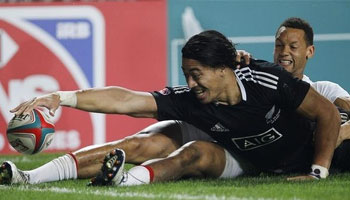 The All Blacks Sevens team beat Wales and Australia to advance to the final, where they led 12-7 at halftime before scoring two tries in the second half to seal the win.

England beat South Africa and Fiji in the knockout stages, couldn’t contend with the dominant Kiwis.

“It is a great feeling. My captain leads so well from the front, he was simply amazing,” said jubilant coach Gordon Tietjen post match. “And also the other players linked in with him, we played a good final. This will certainly help in going towards winning that title.”

Fiji won the third place playoff by beating Australia 21-12, while South Africa beat Wales in the Plate Final. They are currently the biggest challenge to New Zealand overall, trailing by just seven points, with Fiji in third place. England are in fourth place and Australia in fifth with two legs remaining.

“I was just really pleased with the effort from our guys,” said England coach Simon Amor.

“We had seven new guys here and to play the big three today was a tough ask. New Zealand are obviously such a good side so maybe the final was just one game too far for us. But overall I am really happy for the guys.”

Below are highlights of the final day, with Day One and Day Two highlights on the next pages

Official Highlights from Day Two of the 2014 Hong Kong Sevens

Official Highlights from Day One of the 2014 Hong Kong Sevens