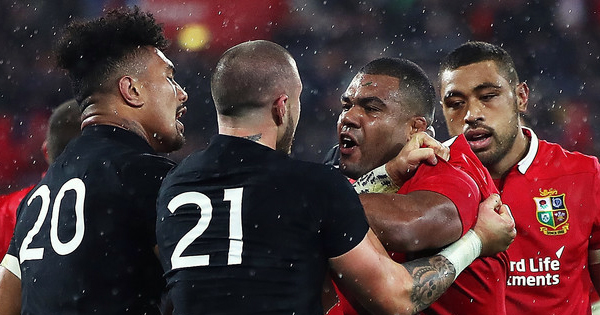 Our Kiwi friend Tony O’Sullivan (CHOKE – Growing Up Black and Blue) chimes in with his thoughts on the third All Blacks vs Lions Test this weekend. What started out as a good concept soon turned into a one-eyed rant about the previous Test, but we’re okay with that. Over to Tony!

Okay first things first, I’m A Kiwi and an All Blacks fanatic. If you are looking for an impartial by the book preview of game three of the All Blacks vs British and Irish Lions, you have come to the wrong place. If you are keen to take a look on the other side of the fence into the psyche of the NZ rugby public before one of the biggest test matches of the generation, keep reading.

But just so you know, I’m hoping/expecting the All Blacks to rack up a cricket score.

This follows a game where Anthony Watson brutally assaulted Sonny Bill Williams by head butting his unprotected shoulder. A game which has been hailed as a classic by the British press. Personally, I would call it a crapper in the rain.

It was a game where Frenchie Jerome Garces caused about as much affection from Kiwis to a Frenchman as that time Chac Chirac decided to test his nukes in the Pacific. How do we feel about it? We’re pissed off.

We lost. We didn’t get the rub of the green. We now have to listen to the Poms bang on about their amazing performance (that stings the most).

Sonny Bill Williams (not to be confused with his Korean half brother, Billy Son Williams) screwed the pooch. He misjudged an assisted tackle, collecting the head of a falling Anthony Watson and got red carded. 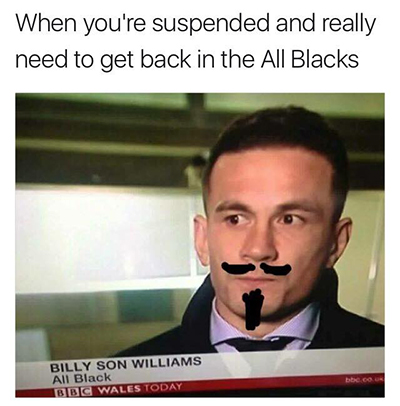 Fair cop, they’re there the rules, Sonny. SBW now has the unfortunate honour of being only the third All Black in history to get sent off. I thought it was harsh at the time but the standard was set.

The second half comes and Wellington-born hometown boy, Mako Vunipolo, deliberately led with the shoulder with intent to hit Beauden Barrett on the noggin and didn’t miss.

Beauden was on the ground unprotected, the ball had cleared the ruck and this was pure thuggery as the replays confirmed to those of us with one black eye. Red card, right? Yellow card?!!! Not cited by the judiciary either. What a load of Lion sh*t.

Minutes later Sean O’Brien connects with a swinging arm to the head of one of our key attacking weapons, Waisake Naholo, causing him to be forced from the field and fail a concussion test.

Referee Garces took a quick glance and deemed there was nothing wrong with it? Aye? ‘Get off your Knees ref, you’re blowing the game!!’

The citing commissioner Scott Nowland subsequently deemed the act worthy of a red card. O’Brien was cited and then to throw salt in the wound of Kiwi fans, was let off scot free. Reason? None supplied by all convict (Aussie) citing panel.

This after SBW was given 4 weeks for a non-intentional reckless act. If O’Brien’s swing arm causing concussion wasn’t reckless, I don’t know what is. I can feel my blood boiling as I write this.

Finally the penalty that gave Lions the game. Sinkler running at full tilt into the defensive line. All 133kg (21 Stone) of Charlie Faumuina moving forward to make the tackle and stop Sinkler in his tracks.

Sinkler jumps into the air and collides with ready and waiting Faumuina. Try stopping that sort of momentum. Technically it’s a penalty but lacks sense and with teams always looking for a competitive edge, this could be a cow worth milking, setting a dangerous precedent.

Two try’s to none, F#$k ME. Now we have to listen to likes of human cauliflower Graham Rowntree telling us it was a ‘special game’ and ‘they were delighted with how the players stepped up’.

Ask yourself, would he be saying that if Beauden had his kicking boots on that night? The Lions scraped a victory vs 14 men and it was ’special?’ Uggh. I honestly thought they played better code in the 1st test.

If you’re a Brit I fully expect you to disagree with almost everything I’ve said here, and that’s OK.

I’m well aware I sound like a little b*tch. This is just the chat that is taking place all throughout this beautiful country. We’re giving in to my own confirmation bias, our tribalism and just being fans.

I have read endless comments and articles about how the AB’s get away with whatever they like on a footy field and I’m sure the people who write them, who like me embrace their own inner b*tch, are really just fans of their own teams and as such let that guide their view of the game.

It’s all good, we just love our teams. That’s got to be good for rugby.

Speaking of things that are good for Rugby: a third and deciding Test. As I sat down to write this I intended on writing a preview for a game many in NZ a calling as big as a Rugby World Cup final.

I thought about what will be deciding factors in this upcoming game and what I came to realise was the second test will have a huge impact on game three. In recent times the AB’s have always hit back incredibly hard after a loss.

The manner in which they lost would have really stung for the team in black and by all accounts, the squad has a steely edge to it. This gives me confidence that the AB’s will take it to a level the Lions can’t cope with.

The Lions, on the other hand, keep saying we haven’t seen their best either.

The forecast is for a dry track and if both teams deliver on what’s brewing, this could be a cracker!

If he’s allowed back, we’ll have more opinion pieces from Tony soon – RD