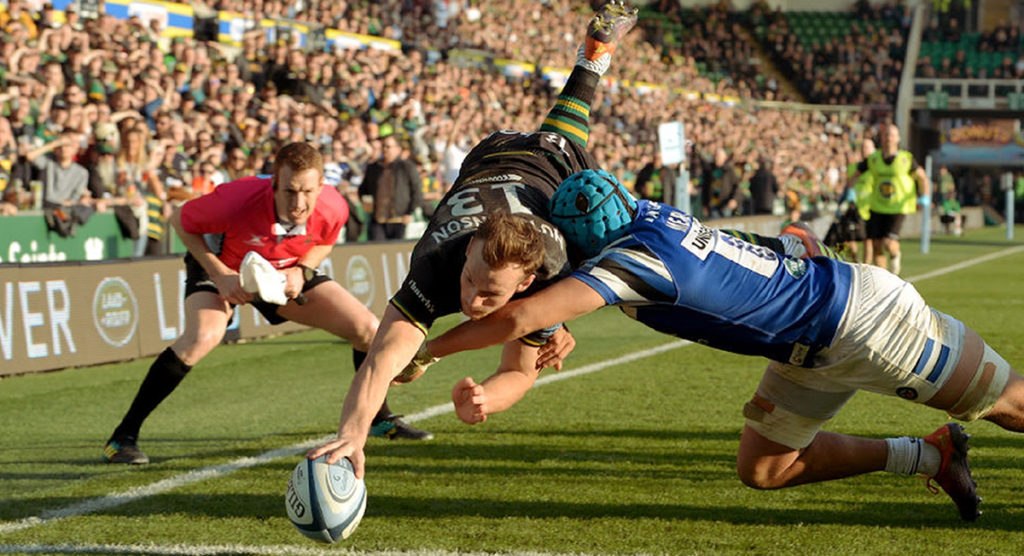 Northampton Saints have been awarded the Premiership Try of the Week for Rory Hutchinson’s brilliant try against Bath at the weekend. He beat out four other excellent candidates for the award (see below).

He faced stiff competition from Harlequins’ Mike Brown, Bristol’s Alapati Leiua, Newcastle’s Zach Kibirige and Bath’s Ruaridh McConnochie, as all club’s took advantage of the wonderful conditions last weekend, with three of those tries starting deep in the scoring team’s half.

From start to finish the try is of the highest quality, as there was class throughout. Fullback George Furbank’s floated pass for the onrushing Hutchinson was sublime, and it allowed him to make a powerful run along the wing. Northampton were able to keep the ball alive until they were only metres away from the line, where Tom Wood put the centre in for the try in the corner.

What will please coach Chris Boyd is that this try was largely created by Furbank, who is 22, and Hutchinson, who is 23.

This was a wonderful showcase of the youth coming through the ranks at Franklin’s Gardens, and alongside James Grayson at 10, the Saints have a very promising side capable of playing brilliant rugby, as shown.

In a nail-biting affair, Northampton went on to shade Bath 27-26, but it was this try that has caught the attention of many.

How will you watch the next rugby World Cup – Enter for a chance to win £100
https://www.surveymonkey.co.uk/r/WH2MFM3