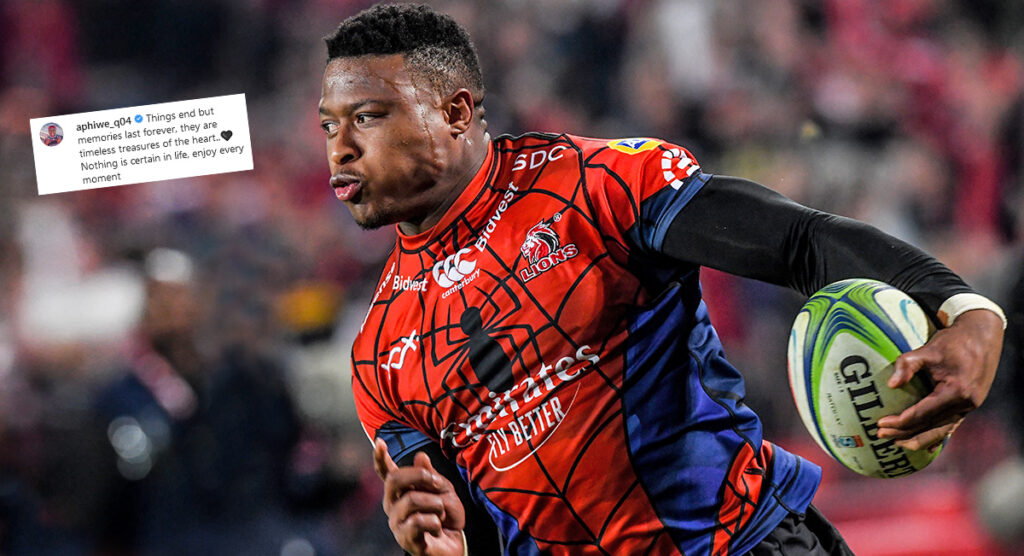 South Africa winger Aphiwe Dyantyi has shared a highlights reel of his career to date on Instagram during his suspension from the game.

The 25-year-old shared the video of his time with the Lions and the Springboks, alongside the caption “Things end but memories last forever, they are timeless treasures of the heart… Nothing is certain in life, enjoy every moment.”

The winger is still suspended having tested positive for anabolic steroids last year during a Springboks training camp. The South African Institute for Drug Free Sport confirmed that samples provided by the 13-cap international in July tested positive for three prohibited substances, although he has insisted that he is innocent.

However, his B-sample was also tested, which confirmed the presence of banned substances metandienone, methyltestosterone and LGD-4033.

In many ways, Dyantyi is the forgotten man of South African rugby, as so much has happened since the news broke last year. Not only did the Springboks go on to win the Rugby World Cup later in 2019, but the COVID-19 pandemic this year has diverted attention away from rugby altogether.

This is a cryptic message from the Springbok, as he has been left waiting for quite some time for a hearing, particularly as his career hangs in the balance with the decision. He faces a minimum of a four-year ban should he be found guilty, which could well end his career.

This video does reconfirm what a player he was, if anything else, and why it was no surprise that he was named the 2018 World Rugby breakthrough player of the year, having scored six tries in his debut (and only) Test season.

Dyantyi has remained upbeat throughout this period out of rugby, and may well be resigned to what may happen. However, he has had to wait an extraordinarily long time to find out his future.