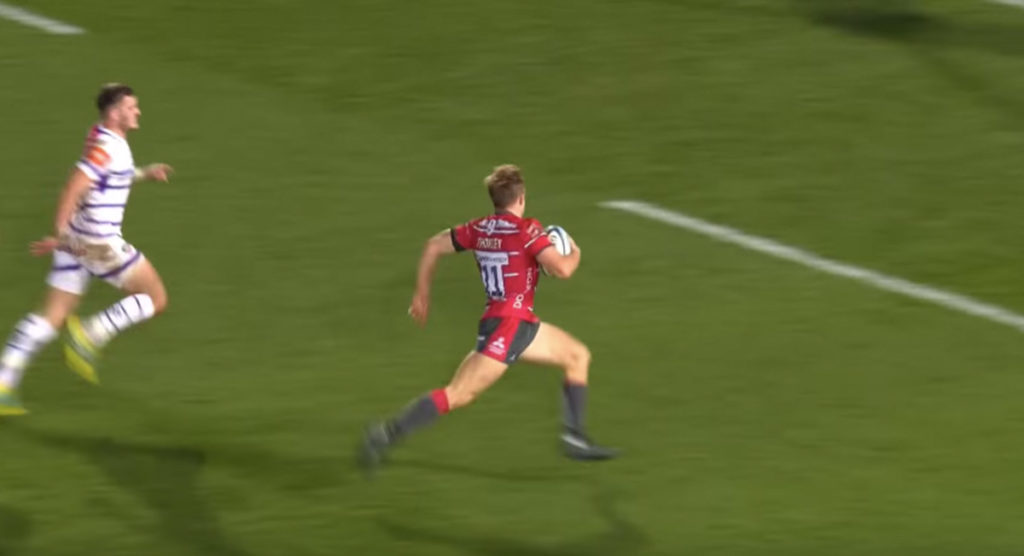 Gloucester’s Ollie Thorley was highly influential in his side’s 36-13 bonus-point Premiership win over Leicester Tigers at Kingsholm on Friday night. He scored two incredible tries, the second of which is in consideration for the Citizen Try of the Week and will surely make the shortlist for Try of the Season.

Due to injury, it was his first Premiership start of the season. Needless to say, he relished the occasion and delivered a man of the match performance.

The first moment of brilliance came with just five minutes gone in the second half. Displaying serious pace, Thorley exploited a sizable gap in Leicester’s defence and sprinted 55 metres for the score. That try alone would make it a good night.

However, it was the second try that has everyone buzzing and drawing comparisons with Gloucester great James Simpson Daniel.

The score started inside the Gloucester 22. Ben Morgan picked up a loose ball and was off to the races, displaying some nice stepping skills of his own by beating two defenders. Morgan then found Thorley on the wing who ran in and out and around defenders, before stepping on the gas to outrun everyone else.

Thorley is already well-known for being a Junior World Championship winner with England Under-20s. Though it’s hard to say with just one start this season, many more performances like this will certainly put him on Eddie Jones’s radar very quickly.

Wonder try (UK & IRE only – scroll down to see it elsewhere):

Thorley is shown his tries, then reflects on his performance:

His try is included in the Citizen Try of the Week compilation below, with original commentary. They’re all great but there’s really only one winner there!