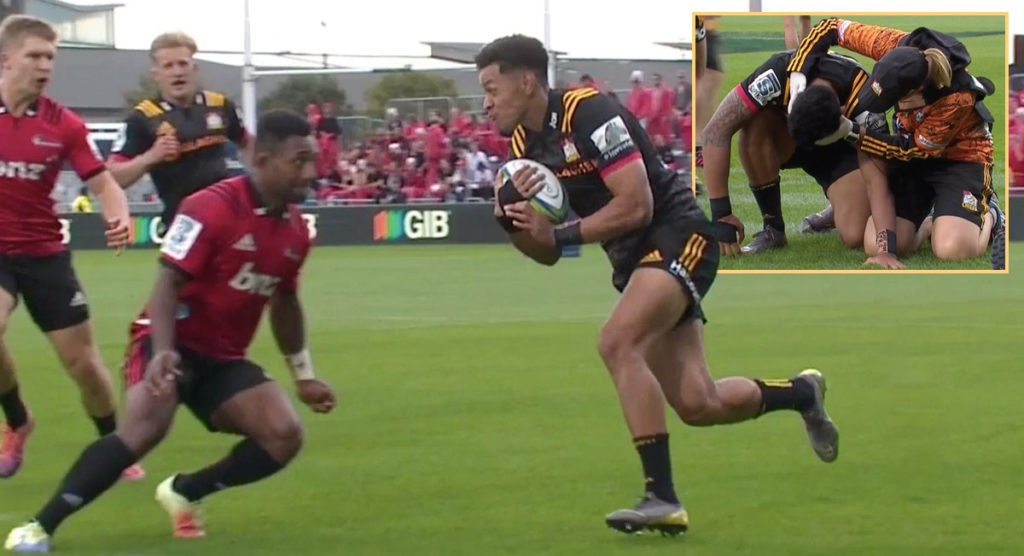 Sevu Reece marked his debut for the Crusaders last weekend in impressive style, with a Man of the Match performance against the side that never selected him, the Chiefs.

The 22-year-old Fijian was on the scoresheet in the champions’ 57-28 dismantling of their New Zealand rivals, and Reece has already made a great name for himself.

Not only did he look fantastic with ball in hand, but his defensive contribution has also drawn a lot of attention, particularly this tackle on Solomon Alaimalo (more replays lower down).

By modern standards, this hit is right on the edge of what is legal and what is not, as the brutal collision can be heard in the commentary. Alaimalo had to leave the field for an HIA.

WATCH: This Sevu Reece tackle was so good that even the guy he smashed laughed about it

Reece is not the biggest player, but he certainly packs a lot of power in his tackles, and it will be no time at all before he garners quite an intimidating reputation if he keeps those displays up.

His 153 metres in 16 carries, five line breaks and an intercept try wouldn’t have hurt either.

“Defensively, outstanding. And as any good winger, he just calls when he wants the ball, so he pretty much doesn’t shut up because he always wants it,” said Ryan Crotty of Reece post-match.

@sevu_reece made a huge impact in his #SuperRugby debut for the Crusaders. 🔥