Owen Farrell kicks England to victory over Ireland in Dublin 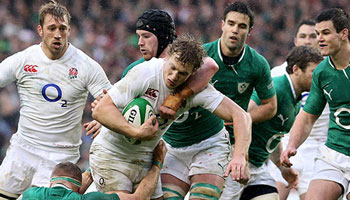 Owen Farrell kicked all of England’s points as they went top of the Six Nations table with a 12-6 win over Ireland in wet conditions in Dublin. It was England’s first win there in ten years, as they remain the only side now capable of claiming a Grand Slam.

Farrell held his nerve to kick a brace of penalties in either half of play to help England claim victory in what was a tight and physical battle.

“If you practise enough it’s only another kick. I kick thousands of them,” Farrell said in his post match interview. “Conditions out there weren’t great but we rolled our sleeves up and got stuck in.”

Ronan O’Gara, on for injured flyhalf Johnny Sexton, kicked two penalties of his own for Ireland, but it was England’s day as they edged ahead despite going a man down when James Haskell was yellow carded for attempting to kick the ball away at the bottom of a ruck.

“The stakes have always been high but they go even higher with France coming to Twickenham next off the back of a defeat (to Wales) yesterday. That game will be massive.”

This was the first time England had won in Dublin since 2003, the year that they last won the Grand Slam, and later, the Rugby World Cup.

On a sidenote, congratulations must go to Brian O’Driscoll, who had a frantic morning as he and wife Amy celebrated the birth of their first child, a baby girl, just a few hours before kickoff.