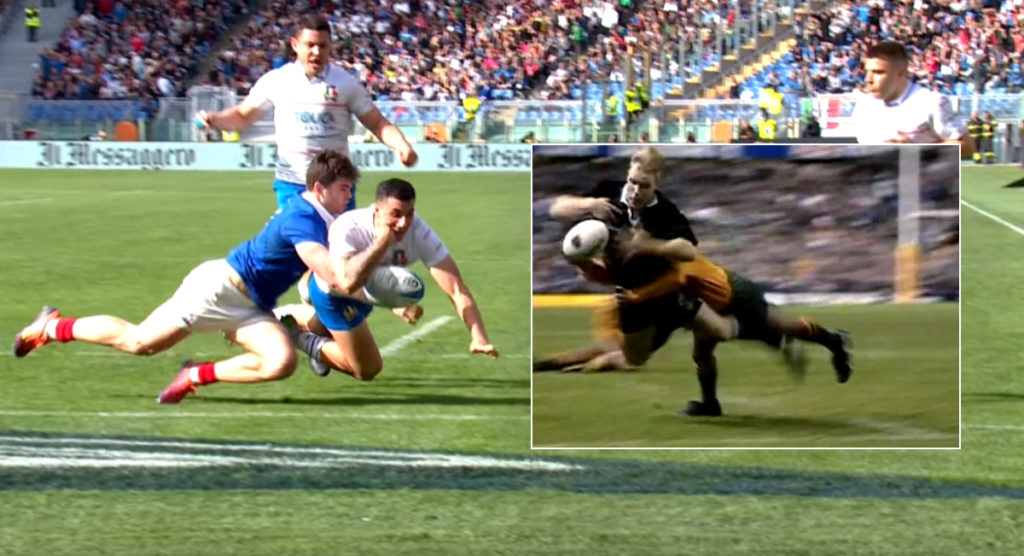 Jacques Brunel’s France might be in a seemingly never-ending slump in form of late, but the emergence of its young players has given fans a glimpse of an up-turn ahead of the World Cup in September.

One of the players who stood out the most in this season’s 6 Nations was Damian Penaud, son of former internationalist Alain, who proved a crucial asset in his side’s victory over Italy last weekend.

Not only did Penaud score the try which ultimately secured the win – following a terrific off-load from Romain Ntamack – the winger also prevented a certain try from the home side minutes earlier, effectively turning the tide of the encounter in favour of the visitors.

France were nowhere near their best and Conor O’Shea’s Italy probably felt like they deserved to come out on top after largely dominating. Six minutes from time, Italian centre Marco Zanon thought he had given his side a shot at the lead following a good move.

But Penaud, perhaps taking a leaf out of team-mate Maxime Médard’s try-saving antics against Bath in the European Champions Cup, made a sensational last-gasp tackle on Zanon, knocking the ball out of the centre’s hand and preventing the score.

For those who remember it, it would have immediately brought back memories of George Gregan’s famous tackle on Jeff Wilson in 1994.

For Italy, it was a case of poor technique from Zanon, who kept the ball in just his right hand, leaving Penaud’s knock-down far easier than if the Italian had kept his right hand free for a fend.

Every coach’s nightmare was encapsulated in this movement and it was further exacerbated by Zanon offering himself a smile and slightly exaggerated dive before the line.

It may have been a combination of a blooper along with a brilliant try saving tackle, but either way it’s something Zanon will hope to forget.

WATCH: A look at the Top Three Try Saving Tackles ever, as chosen by Dewi Morris

The silver lining is that he will no doubt learn from this blunder in future. But needless to say, had he succeeded in scoring and fly-half Tommy Allan slotted the conversion, Italy may well have gone on to win the match, which they arguably deserved to do so.

Instead, they ended another 6 Nations campaign winless, but demonstrated a far more positive tournament than their 2018 form suggested.