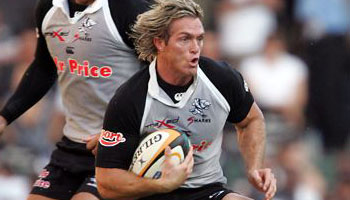 This is only a few minutes into the 2007 Super 14 Final, played in the Durban ‘Sharktank’. The game itself was fairly scrappy throughout. There were, however, several crunching tackles; some legal, others not.

This is obviously one of the not-so-legal tackles, as Byan Habana clearly takes Percy Montgomery in the air. Should it have been a yellow-card? If it had occured later in the game I think it would have been… But it was very early and the referee, Steve Walsh, didn’t want to send anyone to the bin just yet, by the looks of things.

Habana said this about it:
“It must have looked awful from the stands but I never had any intention of hurting Monty. As I went in for the tackle I slipped and could not stop myself.”

Interesting note: When Walsh is talking to Matfield and Habana he says there are a “few problems” with the tackle. “Firstly…You took the man out in the air, etc etc.” and then he never really finishes with that. He just proceeds to say he wants composure, and then they play on.