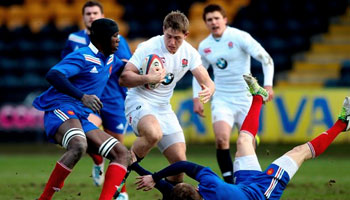 England beat France 40-10 in their Under-20’s Six Nations game at Sixways at the weekend. England led just 6-3 at halftime, but found their feet in the second half as France tired. Here’s a quick look at two of the best tries from the high scoring game.

With ten minutes left in the game England lifted the tempo and captain Jack Clifford got his second try, thanks in part to a superb tap on from prop Luke Cowan-Dickie. Wing Henry Purdy completed the effort later on, scoring in the corner after a good run from Ben Howard.

Both tries were uploaded by the official RFU channel, and after a few requests for another look at the Cowan-Dickie flick pass, we thought such a good piece of skill needed to be shared.

After three matches played, Wales top the U20 Six Nations table with 6 points, followed by England and Scotland on 4 points, then Ireland and France on 2 points. Italy are yet to win a game.